Have you caught the new and awesome tv show on MTV based on the movie Catfish?  It’s called Catfish – the TV Show and stars the adorably adorable Nev, who got scammed in the original documentary.

I’m addicted to the show and get giggly & giddy when I see there is a new episode in my Hulu queue.  Each show, we are introduced to a 20-something man or woman who has met someone online but they haven’t met in person yet.  They’ve usually exchanged pictures and talked on the phone, but most likely have not used Skype or Facetime yet.  Episode after episode, the unsuspecting person meets their “soulmate” on the other end – often women pretending to be men, men using someone else’s photos, or…in one case…a pre-op transgender man (who ended up being such a sweetheart!).

But, this show has got me thinking about the whole online dating thing.  It’s one thing to meet someone on a dating site and eventually go out, but it is another thing to accept a random friend request on Facebook from a stranger…and then proceed to fall in love.

I’ve received several requests/messages on Facebook from strangers.  I thought I would share a few of them with you so you can understand that it can happen to anyone.  The only difference is that I chose not to respond.  In each case, I’ll tell you why.

The first red flag is that he says his name is David, but his profile uses another name.  Although I do have a profile on Singles Warehouse, I think it is a bit odd that he wrote to me privately on Facebook instead of on the dating site.  When I clicked on his FB profile, this came up:

It appears that he has 5 FB friends.  This is something I learned from Catfish.  If someone has less than 100 friends, it is usually a fake profile. 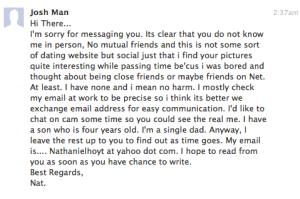 So, this message says it comes from Josh Man, but is signed by Nat and includes an email address from him as well.  That’s a big red flag, of course, but then there is the message that states that he finds “my pictures quite interesting.”  Only…I only allow my friends to view my pictures.  So, that’s a lie.  He also tells me that he mostly checks his email at work.

I did get a third message that I wanted to share, but upon further investigation, his profile is legit.  He’s a father with kids and their pictures are on his FB profile.  For his protection, I won’t call him out on here, especially because his message was rather sweet.  But, he lives in New York and I don’t know him, so I didn’t respond.