I just read this very touching piece by Joanna Perryfolino from the Huffington Post about the challenges with online dating.  Perryfolino writes:

The time to get to know someone, really get to know someone, in light of their true selves, their needs and wants, happens slowly. Our hastened, cyberspace, hurry-up nanosecond world of online dating allows us to quickly move on to the next when you don’t like this guy or if that woman is too bitchy or opinionated. No consequences, no one gets hurt. There are a lot more where that came from.

And she’s completely right.  I think one of my main stumbling blocks is the lack of romance in online dating.  Think about Mr. Dunkin Donuts.  I mean, he wouldn’t even take me somewhere halfway decent on a first date – be it a blind date – but it showed such a lack of effort on his part.  He’s the type of guy who’d I expect to let the door slam in my face instead of holding it open for me.

But let’s be clear here.  It’s a two-way street.

If I am to expect romance and chivalry, then I need to offer it in return.  And I do.

There’s something so blah about having an extensive text exchange with someone you’ve never met.  I understand it is common place and I’m guilty of it, but it’s so cold and impersonal.  I still remember, when I was in college, my boyfriend would buy me a rose in the campus center and bring it to my dorm room on Fridays.  If I wasn’t there, he’d leave it at my door.  It didn’t happen all of the time, but often enough that I still remember.  It is those simple gestures that mean so much.  Now I’m thrilled if a guy sends me an emoticon.

Wouldn’t it be cool if we could revert a little back to days like this? 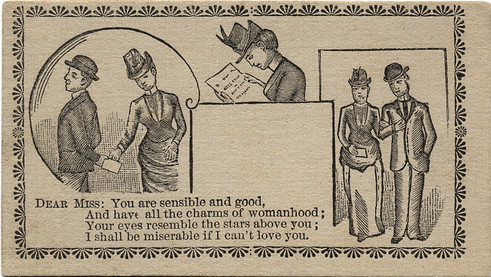 2 thoughts on “Is romance dead due to online dating?”