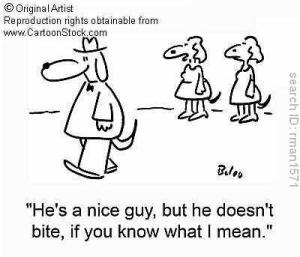 My friend Alex recently sent me a link to this article from Fox news.  Admittedly, I probably wouldn’t have found it myself since I’m not a consumer of Fox news, like him, but I cannot stop thinking about what I read and how it makes so much sense to me.

The article, if you click on the link above, is about men and female responses during dating, and how they differ.  It states:

Men are sexually attracted to women who show an interest in them or who are responsive during a date, the study found. On the flip side, women are not sexually interested in the responsive men they meet for the first time, the research also discovered.

That makes complete sense to me.  I can usually tell when a guy is interested in me on a date because he’ll be physical with me.  I’m not necessarily talking about macking on me or grabbing a boob, but I’m talking more about a touch to the shoulder or a slight hand on the leg if you sit next to each other.  On the other hand, I may be a bit more standoffish on a first date, as the study suggests, because I’m taking my time to decide if there is a connection.  While I may be immediately physically attracted to someone, sometime’s the chemistry isn’t there.  Or, in other circumstances, the physical attraction doesn’t jump out right away, but as I talk to someone, I might start seeing him as a potential mate.

Men who perceive women to be interested in them rated the women as more feminine and sexually attractive. They also showed more interest in having long-term relationships with the responsive women than with the nonresponsive women.

Fascinating, huh?  I mean, it sounds like common sense, but it’s interesting that if a man thinks you’re also interested in him, then he thinks your hotter than you may actually be!

Do nice guys finish last?  Nice girls finish first?  Who knows!  But, it does open my eyes to some recent dates I’ve had and hopefully will have in the future.

2 thoughts on “Who finishes first – nice girls or guys?”